Rolfe Blume of Upper Frankford Township near Carlisle, Pennsylvania operates a gun shop on his property and supports the 2nd Amendment right to bear arms. He also has vigorously fought for 5th Amendment property rights. His challenge to the Mariner East 2 pipeline as being for private enterprise, rather than for a public purpose, is pending before the Pennsylvania Supreme Court. Recently his multiple complaints to the Pennsylvania Department of Environmental Protection helped convince the Department to suspend the pipeline construction.

“They ruined my place, they ruined my life, they ruined everything. There is so much stuff they’re doing wrong, it’s a danger to people and property. It should have been stopped a long time ago.” – Rolfe Blume

Construction of the pipeline planned to ship liquid natural gas across the state has been put on hold over multiple violations, and that comes as no surprise to one Cumberland County man.

“I haven’t had water since June,” said Rolfe Blume of Upper Frankford Township.

Since the beginning of construction of the Mariner East 2 pipeline, which passes through his property, Blume said his well water has been infected with a yellow slime.

Though Blume’s farm was not listed on the Department of Environmental Protection’s order that temporarily halted construction of the pipeline, some Cumberland County homes have reported similar issues. 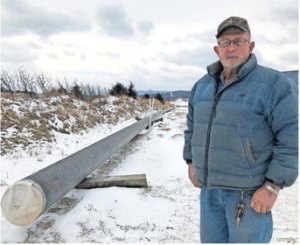 Rolfe Blume of Upper Frankford Township, above, is pleased to see construction halted on the Mariner East 2 pipeline. He said it has impacted his well and ruined his property. Pipeline construction stopped after a state Department of Environmental Protection order. Some of those violations were in Silver Spring Township, where pipe and construction equipment still sit, waiting to resume work.

“Until Sunoco can demonstrate that the permit conditions can and will be followed, DEP has no alternative but to suspend the permits,” DEP Secretary Patrick McDonnell said in a statement.

“We are living up to our promise to hold this project accountable to the strong protections in the permits,” he said.

“We received an order this morning from the Pennsylvania Department of Environmental Protection that instructed us to suspend construction activities in Pennsylvania with respect to Mariner East 2 until reauthorized by the Pennsylvania DEP. The order requires us to submit various reports related to current and future construction activities. We intend to expeditiously submit these reports and we are confident that we will be reauthorized to commence work on this project promptly. We also reiterate our commitment to the highest levels of construction expertise and our dedication to preserving and protecting the environment in which we conduct our work.”

Among the violations reported across the state, the owners of private wells in Cumberland County near North Locust Point Road in Silver Spring Township reported cloudy water in December.

According to the report, Sunoco’s permits allowed crews to use an open-cut method in that area, meaning they could chop down trees and dig through land to install the pipeline.

But at these sites with the cloudy well water, the company instead used a “trenchless construction” method by boring a drill horizontally underground to move the pipe through. They did this without obtaining permit modifications or authorization, according to the report.

This is a violation of the state’s Clean Streams Law, DEP said.

Those homeowners could not immediately be located for comment, and DEP officials would not share their names, saying they do not release information about private residents.

More violations were reported in a wetland in Lower Swatara Township and off Shaeffer Run in Toboyne Township, Perry County.

Similar to the Cumberland County violations, the Lower Swatara Township incident stems from the company using the boring method instead of open cutting, this time through state waters, according to the DEP.

In Perry County, the DEP received complaints that the company installed a bridge that had been previously deemed to be unsafe by county inspectors, and it was installed over a designated wild trout waterway without obtaining a permit from the department.

The order suspends all work until the department provides authorization for the company to resume construction and gives Sunoco 30 days to submit reports.

“The permit suspension was not the result of a single incident but rather from the pattern of knowing violations of the permit conditions and the numerous pollution events,” DEP press secretary Neil Shader said.

In another part of the state, the Delaware Riverkeeper Network, an environmental group, said Sunoco also violated a settlement agreement with them that had been secured through litigation.

“This project was flawed from the start, and it is disgraceful that these flaws have manifested themselves in such a way that the public’s health, and environment have been significantly impacted,” said Maya van Rossum, leader of the network.

But Blume, who has a farm and gun shop in Upper Frankford Township, said he has had similar problems all along during his fight with Sunoco Logistics.

Blume was among the Cumberland County residents who unsuccessfully tried to stop the pipeline in court.

Construction started on his property in May, toppling trees and upending earth, which he said contaminated his well. He reported this to the DEP but has not heard back yet, he said.

“What polluted my well is they stripped all the top soil off and the grass and the trees,” he said. The disruption infected his water with bacteria that left it yellow and slimy.

The 76-year-old said he has never had water problems on the property until now. He added that the months of noise, construction and destruction of his land have been a hardship.

He is among the last of those involved with the original lawsuit in Cumberland County to continue to fight against the pipeline, and with the DEP’s order halting construction, he sees some vindication for the argument he’s been making.

“There is so much stuff they’re doing wrong, it’s a danger to people and property,” he said. “It should have been stopped a long time ago.”

When complete, the pipeline will be capable of shipping up to 500,000 barrels per day of liquid natural gas, mainly in the form of propane and butane. The company says shipping through a pipeline is cheaper, faster and safer than shipping across the state’s roadways.