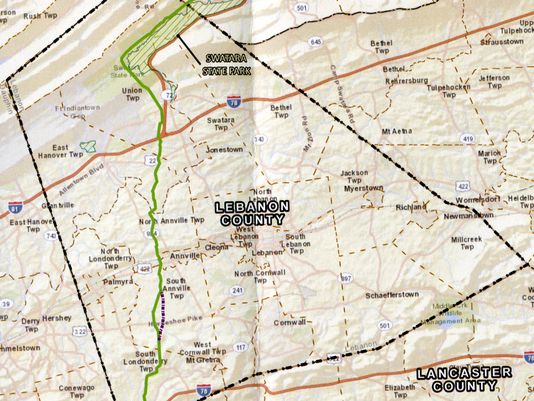 The Federal Protection Environmental Protection Agency in July of 2016 recommended further environmental study and FERC consideration of alternative routes. This resulted in a delay in the projected issuance of the final Environmental Impact Statement to December 30, 2016 with expected FERC approval of the project on March 30, 2017. Williams Partners continues to purchase land options and purchase easements.

Pipeline won’t be completed until 2018.

The Atlantic Sunrise pipeline would bisect Lebanon County from north to south while carrying natural gas from Marcellus Shale-rich northeastern Pennsylvania to the Transcontinental Pipeline (Transco) that covers the east coast.

Williams Partners previously targeted the project to be fully in-service by late 2017, but that was before the Federal Energy Regulatory Commission moved back its schedule for a final Environmental Impact Statement for the project.  The final EIS – part of the regulatory process needed for Williams to build the pipeline – will now be completed by Dec. 30 instead of Oct. 21 as previously announced, according to a FERC notice.

Williams Partners now expects to have Atlantic Sunrise providing partial service by late 2017 and to have the pipeline fully in-service by mid-2018, according to a timeline on the company’s website.

The draft EIS released by FERC in May was favorable for Williams Partners, concluding that the pipeline’s adverse environmental impacts would be “reduced to less-than-significant levels” through mitigation efforts proposed by Williams Partners and by FERC. But the Environmental Protection Agency pushed back in July, recommending further studies and asking FERC to consider alternatives to the currently proposed route.

Anti-pipeline pressure groups Lebanon Pipeline Awareness and Concerned Citizens of Lebanon County recently joined 15 other organizations in a request for FERC to revise the draft EIS. They blasted FERC for not waiting to receive information about how the project will impact wetlands and accused it of failing to disclose key information in a manner that inhibits public participation.

In its notice, however, FERC explained the delay in producing the final EIS as based on additional information filed by Transco. It now plans to first issue a General Conformity Determination followed by a 30-day comment period. The final EIS is scheduled for issuance on Dec. 30, with a March 30, 2017 final federal decision on authorizing the project.

“We continue to work with the FERC, state and other federal permitting agencies to secure the necessary approvals to construct this critical infrastructure project and connect consumers along the East Coast with abundant, cost-effective Pennsylvania natural gas supplies,” said Rory Miller, senior vice president of Williams Partners’ Atlantic-Gulf operating area, in a Williams Partners news release announcing the delay.