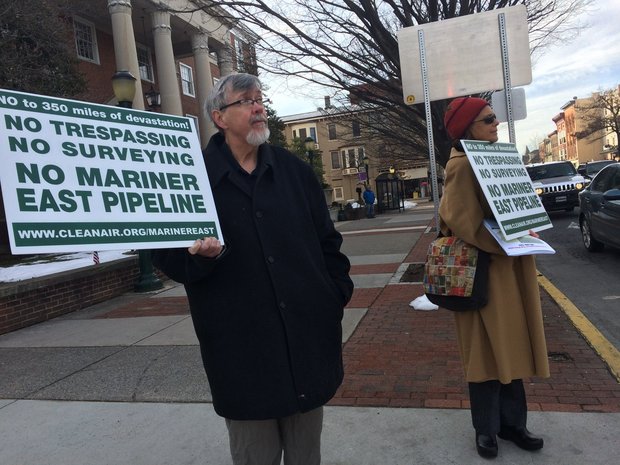 Can Cumberland County farmland be taken for pipeline? Monday’s hearing to continue Feb. 29

It was difficult to tell who was getting more honks from passing cars – the handful of protesters or the man in a Statue of Liberty costume advertising a tax-preparation service.

But cars were honking, and what was clear from the signs the protesters carried was that they did not want Sunoco Pipeline’s proposed Mariner East II running through Cumberland County.

And while there were a few protesters outside of the Cumberland County Courthouse Monday morning, about 30 more people filled a courtroom, coming out in support of three Upper Frankford Township property owners who fear having a liquid natural gas pipeline running under their land.

And it could be dangerous, too, neighbor John Perry added, saying there is a 1,000-foot “hazard zone” around the proposed line that could affect his land and the people who live nearby should there be an accident.

After the first day of a hearing in Cumberland County Court, the main question at issue remains unanswered. Does Sunoco Pipeline have the authority to take a portion of land from three Cumberland County property owners?

Judge M.L. “Skip” Ebert heard from the company and from the property owners who filed objections with court over Sunoco Pipeline’s declaration of taking.

Sunoco officials indicate they have that authority, saying they are a public utility with the right to exercise eminent domain to take land in the services of public need.

“We’ve had decisions in three other counties to date involving eight separate properties,” said communications manager for Sunoco, Jeff Shields. “They said very clearly that we are a public utility with eminent domain authority and our project is something that serves the public need.”

But the property owners argue otherwise.

“The only need here is for Sunoco to make a profit,” said Michael Faherty, the attorney representing the property owners.

Both parties will have to wait a little while longer to find out who is right, though. The hearing will not resume again until Feb. 29.

Faherty worked to build the case on Monday that under state law, eminent domain cannot be used for private enterprise, even if there is an element of public use.

Can a pipeline builder take your property through eminent domain?

Can a pipeline builder take your property through eminent domain?

If a state grants public utility status to pipeline builder, the company eminent domain rights. But is it really a public utility?

And since the Mariner East pipeline expansion, called Mariner East II, will be used for overseas export, that constitutes a private enterprise and no public need, he argued.

Additionally, this makes Sunoco’s Mariner East II pipeline an interstate pipeline rather than an intrastate pipeline, and thus subject to federal regulations, which do not grant Sunoco eminent domain, he said.

But Sunoco Pipeline’s attorneys said many of these issues were already resolved not just in other counties, but in Cumberland County, as well, when Judge Edward Guido ruled in favor of the company’s ability to exercise its power of eminent domain.

Expanding the pipeline system with Mariner East II became necessary with the frigid temperatures that came with the polar vortex in the winter of 2013 and 2014, creating a greater public need for propane, vice president of business development Aaron Alexander testified Monday.

Faherty pointed out, though, that the propane will be going across Pennsylvania and into Delaware for shipment overseas.

“How does that benefit the public in Pennsylvania?” Faherty asked.

Alexander told him the public benefiting can also include the shipping companies.

Alexander also said he does not agree with Faherty’s labeling Sunoco Pipeline as private enterprise, saying the company is a public utility and their rates have been approved by the the state.

When Blume, who has owned his Upper Frankford Township property since 1965, took the stand, he said the pipeline will prevent crops from growing and will ruin several buildings on his land.

And being in a “hazard zone” around the pipeline devalues his property and will make it difficult to sell, he said.

But Sunoco Pipeline’s attorney, Alan Boynton, countered that the pipeline will be underground, and property owners are still free to use the land above however they wish. Any damage will be compensated, as well, he said.

Though the hearing has been continued until the end of the month, property-owner Perry did not feel too confident about their chances of success. The judge indicated he’s still bound by his fellow judge’s ruling unless he hears something different than what has already been ruled upon.

“They keep missing the point,” Perry said. “A lot of this natural gas going through the pipeline will be shipped overseas.”

And Blume, who carries a folder full of photos of burning infernos from pipelines, is hoping the judge will prevent the pipeline from going through his land.