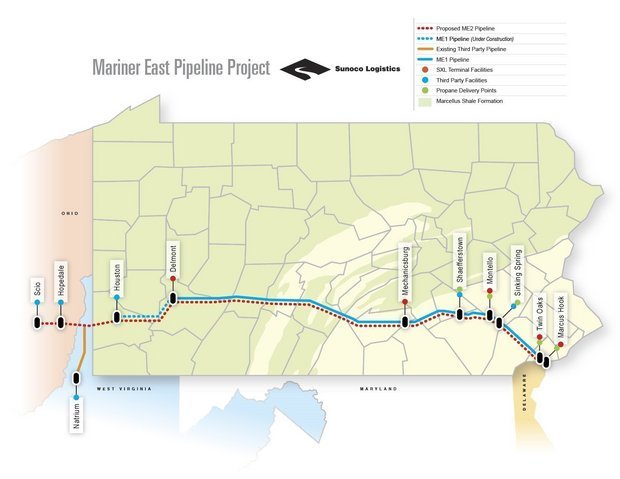 The Commonwealth Court has affirmed a Cumberland County ruling which approved eminent domain power for the Mariner East 2 pipeline. Michael Faherty represented the three involved property owners. Faherty Law Firm is requesting review by the Pennsylvania Supreme Court. That court has issued past decisions which have strongly protected the property rights of Pennsylvania citizens. Some of these cases were cited by the Honorable P. Kevin Brobson of the Commonwealth Court in his dissenting opinion.

The entire Commonwealth Court decision may be found by clicking here.

A sharply-divided Commonwealth Court panel on Thursday dealt three Cumberland County couples a blow in their attempts to block Sunoco Logistics from seizing part of their properties for the Mariner East II natural gas transmission pipeline.

“I think it’s a sad day for Pennsylvania landowners and the Pennsylvania Constitution,” Michael F. Flaherty, the attorney for the property owners, said of the ruling.

“We have always worked with landowners to reach mutually acceptable agreements, and pursued legal proceedings only in those instances where an agreement could not be reached,” the firm said in a statement. “We believe negotiation is better than litigation, and that landowners receive more favorable terms and compensation as a result of easements that are negotiated rather than litigated.”

In the Commonwealth Court majority opinion, Judge Renee Cohn Jubelirer supported Guido’s finding that Mariner East II is both and interstate and intrastate pipeline, with the section running through Pennsylvania falling under the jurisdiction of the Pennsylvania Utility Commission.

She backed Guido’s finding that Sunoco is therefore a “public utility corporation” recognized by the PUC and so has the power to condemn land for the pipeline on grounds that it would provide public utility service in Pennsylvania.

The PUC already has determined a public need for the pipeline, so Guido had no grounds to review challenges the landowners made to that finding, Jubelirer wrote.

McCullough voiced concern that Sunoco may be trying to invoke eminent domain “for its exclusively private benefit.”

“Private ownership of property is a fundamental right under the U.S. Constitution…a right that is zealously protected under the Pennsylvania Constitution as well,” McCullough wrote. “The majority decision, I fear, will gravely undermine that right.”

Brobson called Guido’s finding in the case “incomplete.” He said the matter should be sent back to county court to determine when providing PUC-authorized service “is the true goal of taking the property owners’ land.”

The Mariner East II project is to run from Washington County across Pennsylvania to Marcus Hook in Delaware County. The pipeline is to extend into Ohio and West Virginia as well. It is to have off-load points in Pennsylvania, but its products also are to be shipped out of state.

Sunoco is proposing to permanently take 1.5 acres of the Martin’s land on Longs Gap Road; 0.14 acres of the Fitzgerald’s land along Pine Creek Drive and 0.7 acres of the Nickey’s property off the Blain McCrea Road.

The property owners could appeal the Commonwealth Court ruling to the state Supreme Court. Faherty said he is “strongly recommending” they do so.

In March, Faherty argued before Commonwealth Court that because Mariner East II passes through several states and would carry hazardous liquid byproducts of natural gas production used to make plastics it falls under federal regulations that bar land condemnations.

This story has been updated with comments from attorney Michael F. Flaherty and Sunoco Logistics.

Graphic: The Mariner East II pipeline would cut through Cumberland County as it courses across souther Pennsylvania. (Sunoco Logistics)