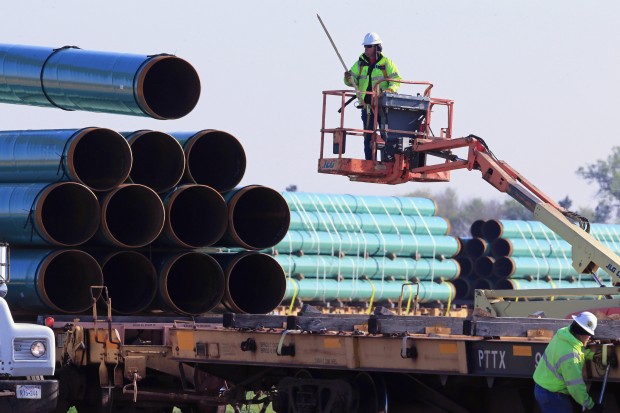 An independent analysis has revealed the data showing that federal regulators approved U.S. pipelines providing capacity more than double consumption. The report provides support to those challenging pipeline approval and the use of eminent domain power as lacking the required public need. Challenges to pipelines based on a lack of a public need have improved, albeit still limited, chances of success.

Charges that the U.S. pipeline industry is building far more natural gas pipelines than it needs are being fueled by a new report showing that the capacity of lines approved by federal regulators over the last two decades was more than twice the amount of gas actually consumed daily in 2016.

The report by the independent Analysis Group for the Natural Resources Defense Council said the Federal Energy Regulatory Commission has approved more than 180 billion cubic feet a day (bcf/d) of new pipeline capacity since 1999, when it began its current policy on approving interstate pipelines. The new capacity compares with the average daily consumption of only 75.11 bcf/d last year, the report said.

Even during the Polar Vortex of 2013/14 when exceptionally cold temperatures in the Northeast boosted the need for heating fuel, consumption of 137 bcf/d was still significantly lower than the combined capacity additions, the report said, citing data from the federal Energy Information Administration. In January 2017, national consumption was 93.1 bcf/d, even further below the capacity of the additional pipeline network, the report said. The data on additions to pipeline capacity are from FERC.

NRDC, in the report issued Nov. 6, said the overcapacity is being driven by the profits that can be earned by pipeline builders; by FERC’s willingness to accept builders’ assurances that there is a need for the additional gas, and by the regulator’s existing application policy that does not recognize big changes in the natural gas market since the policy began.

Cole told StateImpact that an increasing number of pipeline builders are justifying their projects with so-called affiliate agreements in which buyers of the gas are commercially linked with the carrier. When the buyer is an electric utility, that means ratepayers end up paying the cost of the pipeline, she said.

“The pipeline developer is really on both sides of the transaction,” Cole said. “They are both selling the capacity, and the buyers are affiliates, which are increasingly electricity companies that have captive ratepayers.”

She argued that FERC, which approves virtually all pipeline applications that come before it, is too ready accept builders’ assurances that there is a need for a pipeline.

“Pipeline companies tell FERC: ‘We can demonstrate the need because we have contracts subscribing the capacity of the pipeline.’ FERC places undue reliance on that in deciding whether a pipeline is needed,” she said.

In a recent 2-1 ruling, the U.S. Court of Appeals for the District of Columbia found the Federal Energy Regulatory Commission failed properly quantify greenhouse gas emissions linked to a pipeline expansion project in the southeastern U.S.

Despite the high cost of building new pipelines and the existence of spare capacity in existing lines, builders are attracted to new projects because they are more profitable, Cole argued.

“There’s a lot more money to be made if you build that new pipeline, and you have a guaranteed recovery of your costs,” she said. “It’s a very lucrative business.”

The Interstate Natural Gas Association of America, which represents pipeline builders, rejected the calls for a reform to FERC’s pipeline policy, saying it has served consumers by responding quickly to market need.

“The responsiveness of FERC’s certificate process has enabled U.S. consumers and the economy to benefit very quickly from the shale revolution,” said INGAA spokesman Cathy Landry. “This would not have occurred had FERC been bound by a policy requiring extensive proceedings to establish an administrative determination of the needs of the market.”

Landry said the idea of FERC incorporating regional planning into its application process, as proposed NRDC, would be at odds from the regulator’s “pro-competition” policies that rely on the “real world commitments” of pipeline companies to demonstrate market demand.

Still, the issue of over-capacity in the pipeline industry has also been raised by the U.S. Department of Energy, which said in 2015 it expects the rate of pipeline additions to slow in future as gas is increasingly carried in pipelines that have been built over the last decade in response to the shale boom.

“Higher utilization of existing interstate natural gas pipeline infrastructure will reduce the need for new pipelines,” the DOE said in a report.

Meanwhile, the NRDC said FERC’s policy on evaluating pipeline applications does not take into account significant market changes since the policy took effect, including a huge increase in shale gas production, public concerns on whether fracking taints drinking water, and how climate is affected by the shale gas boom.

“The time is ripe for FERC to undertake a structured and collaborative review of its pipeline certification guidance and policy,” said the report’s author, Susan Tierney, a former assistant secretary for policy at the DOE, in a statement.

FERC would not say whether it is looking at the NRDC report, how it responds to charges that it is approving too much pipeline capacity, or whether it is considering a review of its 1999 policy. “We don’t comment on outside reports,” said spokeswoman Celeste Miller.

But Commissioner Cheryl LaFleur indicated her own concerns with FERC’s approval process when she dissented in October from the commission’s approval of the Atlantic Coast and Mountain Valley Pipelines in West Virginia, Virginia and North Carolina, saying both projects would have significant environmental effects.

LaFleur, the only Democrat among the three current commissioners, said the FERC process would benefit from a fuller consideration of how to balance pipelines’ environmental effects, including downstream impacts, with their need.

John Quigley, former secretary of Pennsylvania’s Department of Environmental Protection, said that big changes to the supply of and demand for natural gas since the FERC policy was implemented would justify a fresh look at whether it is working as it should.

“When you look at the impact that this buildout clearly is having in states like Pennsylvania, the environmental impacts, the potential impacts in terms of public health, risks to public safety, climate risks, all of that needs to be considered,” he said. “It is not at all unreasonable to ask that they be considered anew given the rapid change and the scale of the challenge.”

On the issue of overcapacity, Quigley said that national figures may obscure regional variations in states like Pennsylvania where there are not yet enough pipelines to bring huge quantities of Marcellus gas to market.

“Generally speaking, there’s a lot of evidence to suggest overcapacity but when you look at regional and subregional places, especially in Pennsylvania, there’s a pretty strong argument on the other side that given the immense volume of gas that is being produced, it still can’t get delivered to the most lucrative markets,” said Quigley, who is now director of the Center for Environment, Energy and Economy at Harrisburg University of Science and Technology.

In Pennsylvania and New Jersey, opponents of the PennEast Pipeline project argue there’s no need for the line that would carry natural gas some 120 miles from the Marcellus Shale of Luzerne County, Pa. to Mercer County, NJ.

Their argument was backed up in 2016 by the New Jersey Division of Rate Counsel, a public advocate for utility ratepayers, which said the PennEast Pipeline Co. had failed to demonstrate the need for the gas that would be carried by the line, and seemed to be motivated “more by the search for higher returns on investment than any actual deficiency in pipeline supply or pipeline capacity to transport it.”

In a response to claims that the pipeline was not needed, PennEast released a consultant’s report in 2015 saying that energy consumers in New Jersey and eastern Pennsylvania could have saved $890 million in additional energy costs if the pipeline had been operational in the cold winter of 2013/14.

PennEast is still waiting for FERC to issue a Certificate of Public Convenience which would allow it to begin eminent domain proceedings against landowners who have refused its offers of compensation. The company previously said it expected the certificate to be issued in the summer of 2017, and now says it expects FERC to do so “shortly,” according to company spokeswoman Pat Kornick. She predicted the pipeline will be operational in the second half of 2018.