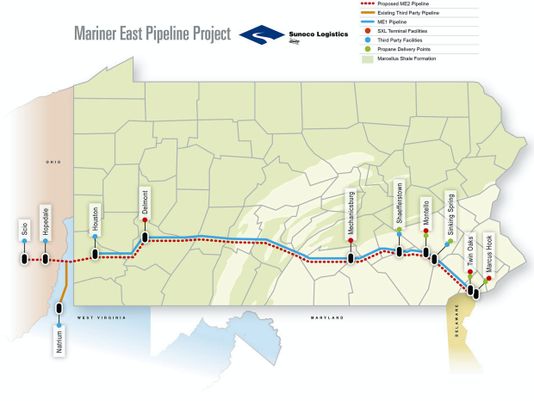 The Sunoco Pipeline efforts to obtain eminent domain power moved to Lebanon County as described in the following news story. Landowners testified to property harms and significant loss of property value, if the condemnations are approved. Sunoco chose not to present real estate appraisal testimony. Instead, Sunoco agreed to bond amounts of value figures stated by the owners. Sunoco asserted it should be allowed to use eminent domain, because of status as a public utility corporation. Mike Faherty presented evidence which could be found to defeat the Sunoco effort based on multiple preliminary objections. A decision could be issued in January or February of 2016.

Three property owners in Heidelberg Township are fighting the company’s plan to build the Mariner East 2 natural gas pipeline – which would span four states and about 350 miles – over their properties. Jerry Thomas owns more than 10 acres of secluded land off Oxford Drive that includes forests and wetlands, and he doesn’t want to see his slice of paradise disturbed.

“We’ve let it become a habitat for Mother Nature – we just love it,” Thomas said. “We enjoy the outdoors and didn’t expect to be infringed upon by what is coming.”

Despite those concerns, the legal case for Thomas and other property owners may turn on whether or not Sunoco’s status as a public utility with eminent domain power extends to the creation of a new pipeline.

Among other objections, attorney Michael Faherty, who represents all three property owners, argues that the Pennsylvania Public Utility Commission’s granting of public utility status does not extend to Mariner East 2 because the PUC has no jurisdiction over interstate projects. Sunoco would need to seek that power from a federal agency, and the Federal Energy Regulatory Commission’s greenlight of the Mariner East 2 project included no such grant, he said.

In response, Sunoco attorney Alan Boynton provided a witness who indicated that the PUC has jurisdiction because the pipeline will also transport fuel between locations within Pennsylvania.   And since the PUC’s designation of Sunoco as a public utility isn’t worded to be specific to individual pipelines, it applies to Mariner East 2, the company argued.

Sunoco representatives added that the pipeline will be subject to restrictions common to a public utility – for instance, rates it charges customers are limited to those approved by the PUC.

Overall, Eby said Faherty raised “delicate” issues, but he did plans to avoid unnecessary delays in deciding them.

The attorneys must submit written arguments within 30 days of the completion of the transcript of Monday’s hearing, after which Eby will make a decision. Faherty requested the opportunity to provide oral arguments in the case, which Eby said he would consider.

One issue was resolved: the value of bonds posted by Sunoco to cover property owners’ potential loss of property value and the possibility of damage during construction. Sunoco representatives agreed to much higher amounts that matched property owners’ own predictions of lost value.

Faherty is a Hershey-based attorney with experience handling pipeline disputes, and he won a victory for resistant property owners in 2014 when a York County judge ruled Sunoco to not be a public utility for the purposes of the pipeline. But that was before Sunoco amended its plans for Mariner East 2 to include intrastate service, a difference that recently convinced a Cumberland County judge to reject property owner objections.

Overall, eight Lebanon County property owners have yet to reach settlements with Sunoco regarding easements for the pipeline, according to pipeline opposition group Concerned Citizens of Lebanon County. In addition to the three properties at issue in this case, two other properties were scheduled for individual court hearings on Dec. 14 and Jan. 8.

“We don’t think it’s the best option for landowners or the company,” Shields said. “We’re committed to dealing fairly and openly with landowners.”