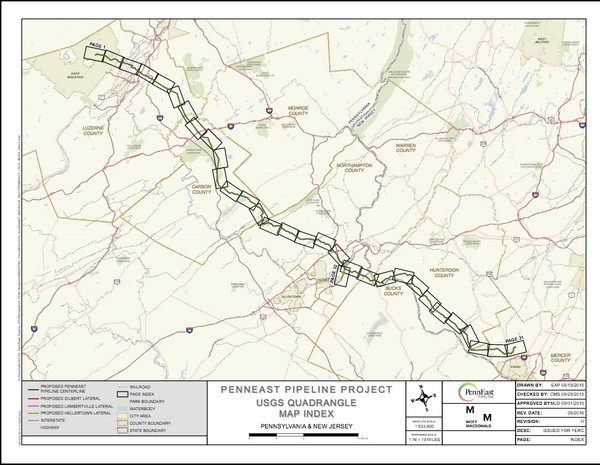 Northampton County wants a jury to decide whether publicly protected open space should be disturbed by the proposed PennEast Pipeline.

The county is one of dozens of landowners in Northampton and Upper Bucks counties targeted by the consortium of energy companies for property acquisition through eminent domain.

The county disputes PennEast’s power to condemn publicly preserved open space through eminent domain. The parcels in Lower Nazareth and Williams townships are protected from condemnation, according to the county.

“The county’s position is that PennEast is trying to use eminent domain for a private enterprise, not one that benefits the public,” the county says in a news release. “The county is also disputing that PennEast is offering fair market value for the easements and that attempting to acquire the title to the property rights prior to payment for compensation violates the separation of powers doctrine.”

Michael Corriere, the county’s first assistant solicitor, requested a jury trial, maintaining that taking the conservation easements are not required for the installation, operation or maintenance of the pipeline. The county also requests PennEast’s suit be dismissed and the county be awarded attorney fees and costs.

PennEast declined to comment on the county’s position. But in a statement following the Jan. 19 conditional approval by the Federal Energy Regulatory Commission, PennEast spokeswoman Patricia Kornick said of eminent domain proceedings:

“Through hundreds of meetings and discussions, PennEast has worked collaboratively with landowners, with approximately 75 percent providing survey access

“Unfortunately, organized and unaccountable opposition groups have their own political agenda and use landowners’ withholding survey access to advance that agenda — to the detriment of the landowners. While PennEast views legal proceedings as emotional, burdensome and costly for all involved, it exercised that last-resort option Feb. 6.”

PennEast hopes to begin construction this year on the pipeline, first proposed in August 2014. It is designed to carry up to 1.1 million dekatherms per day of natural gas for domestic energy use, the equivalent of supplying 4.7 million homes. Construction is projected to take about seven months.