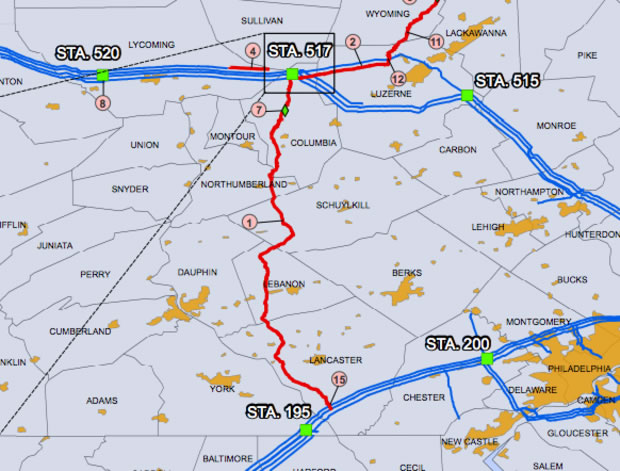 The Harrisburg Patriot News has published a detailed series of articles dealing with Pennsylvania Pipelines. Many are in development and many more are planned. Attorney Mike Faherty prevailed for the landowners on the eminent domain issue in Sunoco v. Loper in 2014. Sunoco prevailed in September, 2015 before Judge Edward Guido in Cumberland County. That decision has been appealed to the Pennsylvania Commonwealth Court. Eminent domain litigation concerning Mariner East 2 is ongoing in multiple counties. Oral argument is scheduled in Washington County on Novermber 17, 2015. Eventually, the Pennsylvania Supreme Court may decide the eminent domain issue with consideration of the Property Rights Protection Act which prohibits the use of eminent domain for private enterprise. Sunoco Pipeline status of a public utility for one purpose would not appear to approve use of eminent domain for a different, private enterprise use.

Several pipelines planned for midstate: Will they move through your backyard?

While the last decade of oil and gas development has been largely contained to the shale regions of Pennsylvania, the next phase will tunnel through the midstate.

Company men have been showing up at doorsteps throughout the region, asking for pieces of private property where pipelines can be built.

After 10 years of drilling, shale operators have more natural resources than the infrastructure to deliver it. There’s now more supply than demand, and pipeline builders are seizing the opportunity and submitting plans for an underground network to move through Pennsylvania.

“These projects are absolutely crucial, especially given the fact that more than 1,500 wells have been drilled and completed and are awaiting pipeline takeaway access,” said David Spigelmyer, president of the Marcellus Shale Coalition, an industry trade group.

Tens of thousands of miles worth of pipeline are proposed for Pennsylvania during the next 10 years, according to state officials.

Some of those projects include:

Pipeline construction is expected to create thousands of jobs, and the natural gas being moved will serve millions of homes.

What the pipelines won’t do is yield tax revenue for Pennsylvania. Unlike surrounding states, the commonwealth does not tax pipelines as property.

As plans mature, these pipelines are being met with the ire of local landowners and the bureaucracy of state and federal regulatory agencies.

In January, eight people were arrested and more than 30 people protested when Williams began tunneling a path for the Atlantic Sunrise Pipeline on what activists said was sacred Native American land in Lancaster County.

Hundreds of other area residents have shared opposition to pipelines during crowded, heated meetings throughout the midstate.

Some landowners then take their cause to court. Residents in York County won a case, while others in Cumberland County recently lost.

Landowners said the company’s Mariner East II had no eminent domain rights because it did not qualify as an intrastate pipeline, which is required for eminent domain status.

Their attorney, Mike Faherty, said the pipeline stretches into Ohio and West Virginia, making it an interstate pipeline that falls under Federal Energy Regulatory Commission jurisdiction and not the Pennsylvania Public Utility Commission. If it’s not regulated by the PUC, it’s not entitled to public utility corporation status and eminent domain rights.

That argument previously worked in Loper vs Sunoco in April 2014 when York County President Judge Stephen P. Linebaugh ruled that Mariner East II was an interstate line because it crossed into other states and did not have any facilities in Pennsylvania for loading or unloading gas products.

Sunoco Logistics made changes after that ruling.

Now that the pipeline loads and unloads petroleum in the state, it qualifies and meets the definition of a public utility, Guido said in a Sept. 29 decision.

Though negotiations with landowners sometimes end up in court, a Sunoco Logistics spokesman said eminent domain is only used as a last resort.

Despite these court battles, the majority of state residents are welcoming to pipelines, the Marcellus Shale Coalition president said.

“It also cannot be lost on anyone how important pipelines are for our region’s building and union trades,” Spigelmyer said.

During the next 10 years, Pennsylvania could see 25,000 miles of gathering lines, which connect wells to processing stations and another 4,000 to 5,000 miles of transmission pipelines, state officials said.

In response to the development’s impact on the economy and environment, Gov. Tom Wolf in May created the Pipeline Infrastructure Task Force.

“We need to work with the industry to make sure that the positive economic benefits of Pennsylvania’s rich natural resources can more quickly be realized in a responsible way. This task force is part of our commitment to seeing the natural gas industry succeed,” Wolf said in a press release. The governor was not available for a sit-down interview during the The Shale Bargain series, according to press secretary Jeff Sheridan.

The 48-member task force is chaired by Department of Environmental Protection Secretary John Quigley and includes representatives from various state agencies, the Legislature, oil and gas companies, and environmental groups.

The group has been meeting monthly at DEP’s regional office in Harrisburg.

By February, the task force is expected to give Wolf recommendations for best practices in routing the pipelines to avoid or reduce impacts to the environment and communities.