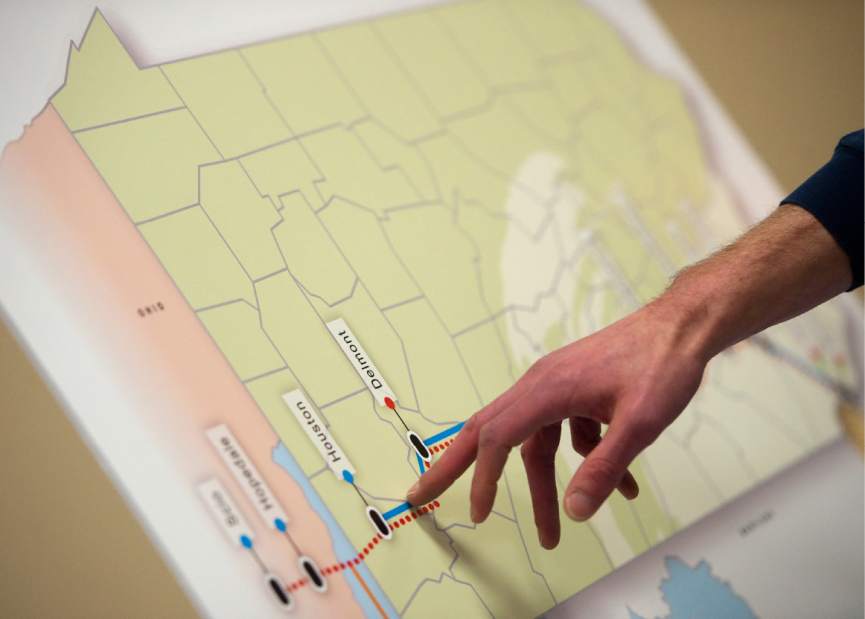 Faherty Law Firm is defending property owners that were served with these condemnation papers. The Sunoco Pipeline attempts to obtain eminent domain power are progressing along the proposed route for Mariner East 2 from Ohio, across West Virginia, across Pennsylvania and into Delaware. Eminent domain litigation in Washington County, south of Pittsburgh has been stayed following submission of Attorney Mike Faherty. Sunoco recently filed additional eminent domain actions in Washington, Huntingdon, Cumberland, Dauphin and Lebanon Counties. Faherty Law Firm represents owners of approximately 100 of the threatened properties.

Sunoco recently switched allegations from admitting that Mariner East 2 crosses state lines to allege that Mariner East 2 is now a pipeline only within Pennsylvania! The pleadings of Faherty Law Firm request payment by Sunoco of property owners fees and costs based on the false assertion of eminent domain power.

Sunoco Logistics’ effort to build a second natural gas liquids pipeline across Pennsylvania is shifting to the courtroom as it gathers land for its $2.5 billion project. The move sets up a legal battle over the status of pipeline companies as utilities that can take land through eminent domain.

“The issue of public utility status and eminent domain remains unsettled,” said attorney Robert J. Burnett, chair of Pittsburgh firm Houston Harbaugh’s oil and gas practice, who predicted the state Supreme Court eventually would pass judgment. “For purposes of clarity and certainty in the law, this issue needs to be addressed by an appellate court,” Burnett said. Philadelphia-based Sunoco filed at least two dozen condemnation cases in counties, including Washington and Huntingdon, to gain rights of way to land by eminent domain for its Mariner East 2 project. The company considers the action, which follows months of more friendly outreach and open-house meetings, a “last resort” when negotiations with landowners over access and price break down.

“We much prefer to reach an amicable solution,” said spokesman Jeff Shields. “That’s a better outcome for everyone involved.”

The 350-mile pipeline mostly would run parallel to a decades-old line Sunoco reworked as Mariner East 1 to carry ethane, propane and butane from Western Pennsylvania shale wells to a terminal near Philadelphia. State and industry officials have cited such projects as necessary to getting gas and liquids from the abundant deep shale to lucrative markets. Sunoco would not disclose how many cases it filed regarding the more than 2,500 property tracts it seeks to cross. Court records show 14 cases filed in Washington County since May 29.

Hershey-based attorney Michael Faherty is representing three of those property owners and said he’s handling a dozen cases in four other counties. He said a case he won against Sunoco in York County last year, and a lack of special certification by the Federal Energy Regulatory Commission, mean the company does not have eminent domain authority. “I’m protecting property rights. Those rights are being threatened,” said Faherty, whose blog on his firm’s website has several posts devoted to Sunoco’s proceedings. “In particular, Sunoco has been telling property owners it has eminent domain authority.”

State law allows public utilities to use eminent domain. Sunoco points to a ruling in October by the Public Utility Commission — regarding pipeline facilities for Mariner East 1 — that the company is assumed to have that designation. “Sunoco has been certified as a public utility in Pennsylvania for many years,” commissioners wrote.

Although the York County ruling does not set a precedent for other counties, it could persuade other judges, said Burnett, who is not involved in the Sunoco cases. Courts need to reconcile such conflicts between county rulings, state agency rules, and federal regulations, he said. As for Sunoco’s lack of a federal certification as a public utility, Shields said, the status can come from the state, the FERC or both. “They are not mutually exclusive,” he said.

Washington County Judge William Nalitz consolidated some of the 14 cases there and scheduled a trial for October. In Huntingdon County, Ellen Gerhart hopes the cases take much longer to decide. “I’m just not in favor of this pipeline,” said Gerhart, 60, Faherty’s client and the subject of a recent Sunoco filing. Gerhart said she and her husband refused Sunoco’s offer of $4,000 for a 1.69-acre right of way on their 37 acres in Union Township, partly because she couldn’t get answers to questions about environmental concerns. “No pipeline can be 100 percent foolproof,” Gerhart said, citing worries about impacts on a spring, creek and pond on and around her property, and the proximity to neighbors’ homes.

Sunoco conducted open houses in each county in the path of the pipeline, but Gerhart said she didn’t know about the event in her county. Shields said Sunoco invited the Gerharts. “We made every effort to have those meetings, which we’re not required to have, to answer questions,” he said.