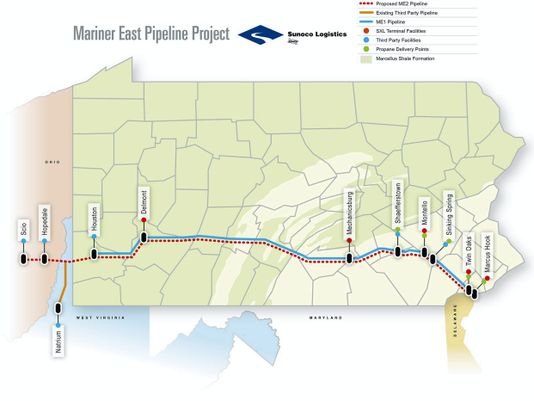 Pennsylvania is being crisscrossed by multiple gas pipelines as a result of the Marcellus Shale drilling. The pipelines are generally transmission lines with little or no opportunity for local service. Thus, property owners obtain the harms without the service. The extent of the harm is subjective and variable. For example, an upscale suburban home with a pipeline crossing near the front of the home would suffer a higher percentage of lost value, than a property of vacant forests. A Lancaster County realtor found harms of 5% to 40%. Owners should be skeptical of land agent arguments of no or minimal harm.

Pipelines can reduce property values by 5 to 40 percent, according to Realtors

Pipelines can reduce property values by 5 to 40 percent by making them less attractive to potential buyers, according to local Realtors.

“People wince when they see (pipelines),” said James Sherer, a Realtor with Lancaster County-based Kingsway Realty. “When you’re getting into those small country plots, it’s going to matter, even when it’s a hundred yards away.”

There are certain restrictions placed on properties because of easements. You can’t build a permanent structure or plant trees directly over them, for example, according to Christopher Stockton, a spokesman for Williams, which is planning to build the Atlantic Sunrise pipeline through Lebanon County. Beyond those specific cases, however, pipeline easements don’t usually reduce overall property values, he said.

Stockton pointed to both Williams’ extensive experience building pipelines and an examination of the proposed Constitution pipeline in New York in which the Federal Energy Regulatory Commission concluded that there was no “consistent information” that a natural gas pipeline would reduce property values.

“We don’t expect a decrease in value from one sale to another,” agreed Jeff Shields, spokesman for Sunoco Logistics, which is planning to build the Mariner East 2 pipeline through Lebanon County.

Wisconsin-based pipeline and power line valuation company Forensic Appraisal Group participated in a study that found a “definitely measurable devaluation” of properties, according to its website. Pipeline easements can create negative impacts ranging from 50 percent of the easement land value to 30 percent of the entire property value, the company said.

On the other hand, a 2008 study by Portland State Adjunct Professor Eric Fruits concluded that there was no significant economic or statistical impact. A May 2012 article in the Journal of Real Estate Literature reviewed several studies and concluded there was “no credible evidence based on actual sales data that proximity to pipelines reduces property values.”

In the Lebanon area, however, local Realtors say they’ve seen an impact when they attempt to sell homes with pipelines on them. Some potential buyers will even call off the deal if they discover that there is a pipeline on the property, particularly if they have children and are concerned about disasters, said Sherer.

“People are a little bit irrational about the subject,” he said. “But it’s a fact that that is the way people think, and there is a stigma from a transmission line running right under your house.”

Realtors said each property is unique, and the impact of a pipeline on sale prospects can depend on its proximity to the house, the pressure level of products travelling through the pipeline and whether the property is residential or agricultural (in which case the impact can be negligible). Value lost can range from 0 to 30 percent, Sherer said.

“The impact is certainly not going to be positive,” said Dennis Beck, a Lititz-based Realtor. “It could have a very large negative impact — it could make some properties hardly saleable.”

Annville-based appraiser Nelson Ebersole thinks Williams Partners has generally offered fair compensation for easements, but agreed that the “stigma” of a pipeline alone could result in a 5 percent property deduction.

Unusual cases could result in a reduction as high as 40 percent — for instance, if the pipeline bisected land slated for development and prevented the owner from building houses there, Ebersole said.

According to calculations Detter compiled based on taxable properties impacted by just the Atlantic Sunrise pipeline, a 5 percent average reduction in value would cost the county more than $30,000. School district and municipal tax revenue would also decline under that scenario.

However, the estimate assumes every property owner successfully appeals their assessment. Even when owners choose to appeal, the highly localized nature of property values could work against such attempts.

An assessor could consider a new pipeline easement, said Chief County Assessor Daniel Seaman. But the onus is on property owners to prove that the value has changed due to a “clear-cut impact” from the pipeline, and that could be difficult since there have been few comparable pipeline projects in the area in recent years, Seaman said.

“It could be awhile until we know for sure,” Seaman said. “There may not be any (impact), but there could be.”