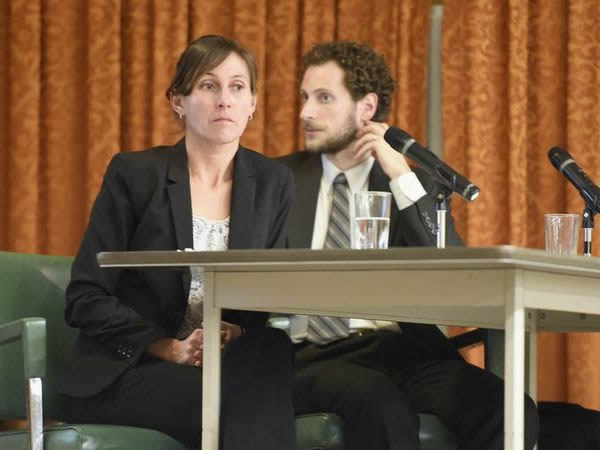 The Lebanon Pipeline Awareness Coalition continues to work effectively in educating many on the problems with proposed pipelines.

It is possible for an organized grassroots effort to thwart or at least impact the plans of two companies hoping to build natural gas pipelines through Lebanon County, experts say.

Those experts are panelists with knowledge of pipeline issues speaking to about 50 area residents during a forum at the Lebanon county courthouse Monday night.

“I know it’s been a long haul for you folks, and it may well be a long haul for another year or two, but you’re accomplishing a lot,” said Lynda Farrell, executive director of the Pipeline Safety Coalition.

A dose of hope in fighting pipeline corporations was exactly what Sharon Bikle and her daughter Shannon Watson needed to hear. Watson lives near Hershey and is trying to prevent Sunoco from acquiring a new pipeline easement on her property, but has had difficulty convincing her neighbors that the pipeline can be stopped.

“To me, it’s unfair. I think it’s unconstitutional.” Bikle said. “No one cares about common people anymore. It’s all about big business, and I’m sick of it.”

The Atlantic Sunrise pipeline — owned by Tulsa, Okla.-based Williams — would bisect western Lebanon County from north to south, transporting natural gas (not natural gas liquids) from northeastern Pennsylvania to the Pennsylvania-Maryland border, where it would connect with the approximately 10,000-mile Transcontinental Pipeline.

The Atlantic Sunrise pipeline is currently in the midst of the FERC review process. Farrell encouraged local residents concerned about the project to provide the reasons for their opposition in comments to FERC, particularly regarding specific local environmental, historical or other community impacts of which FERC might not be aware.

Also participating in the panel was Karen Gentile of the U.S. Department of Transportation’s Pipeline and Hazardous Materials Safety Administration. Two men who had traveled from Delaware County to attend the event heightened tensions by questioning Gentile about what they perceive as lax oversight of pipelines by the agency.

Panelist and former state geologist Jay Parish warned of the possible sinkholes that could occur because of placing a pipeline in limestone-rich Lebanon County. He said that disturbing the sinkhole-prone Epler formation that crosses the southern part of the county is a “disaster waiting to happen.”

If residents are inclined to sign pipeline easements, panelists encouraged them to read the details of their easement and negotiate the best terms possible with pipeline companies. Bomstein said he’s seen easements property owners signed without critically examining them and “you’ve basically given up your first born.”

Lebanon County is already a location where pipelines are meeting determined opposition. Sunoco is embroiled in two cases pending before the Lebanon County Court of Common Pleas: the consolidated cases of three Heidelberg Township landowners challenging its assertion of eminent domain, and a lawsuit filed by Concerned Citizens regarding the construction of a pump station. Williams Partners is not as far along in the eminent domain process, but Annville and South Londonderry townships have passed resolutions opposing the pipeline.

Sunoco recently admitted that the Mariner East 2 pipeline would not come online until 2017, a delay due to complications with obtaining permits. However, Sunoco also announced last week that its repurposed Mariner East 1 pipeline it is now transporting both ethane and propane.

Pipeline companies have said pipelines are the safest and most efficient way to transport natural gas, and insist history demonstrates that natural gas can be transported successfully. Pipeline opponents frequently cite concerns about the environmental impacts of natural gas, the possibility of pipeline explosions, and the potential impact of pipelines on property values.

Sunoco and Williams were both invited to the event but chose not to attend, Ann Pinca of Lebanon Pipeline Awareness said.

This article is part of a content-sharing partnership between Lebanon Daily News and WITF.