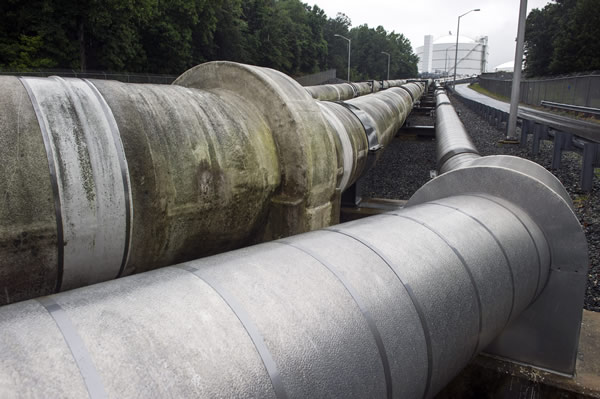 StateImpact has provided strong journalism coverage of various impacts of the Marcellus Shale boom in Pennsylvania. The organization recently published another strong story concerning the multiple court filings of Sunoco Pipeline in attempt to obtain eminent domain power for the Mariner East 2 pipeline.

As Sunoco Logistics steps up efforts to create a pathway for its Mariner East 2 natural gas liquids pipeline across southern Pennsylvania, some landowners are resisting the company’s moves to build the pipeline across their properties.

Residents in at least eight counties are rejecting the company’s offers of cash compensation as too low or unacceptable at any level, and say they will go to court to challenge any assertion of eminent domain that the company makes in an attempt to force its way across private land.

Landowners contacted by StateImpact Pennsylvania accuse Sunoco of making low-ball compensation offers; proposing to locate the $2.5 billion pipeline in places where it could endanger water sources or buildings in the event of a leak or explosion, and of failing to state its plans clearly. Some who have rejected cash compensation have been served with documents that initiate an eminent domain action in court.

The confrontations may represent just the beginning of a process that will pit local communities against energy companies that are sharply expanding Pennsylvania’s pipeline infrastructure in order to ship the abundant resources of the Marcellus Shale to domestic and international markets.

The state could see as many as 30,000 additional miles of new pipeline built in the next 20 years, Department of Environmental Protection Secretary John Quigley said at the first meeting of a statewide task force on pipelines in July.

Meanwhile, Philadelphia-based Sunoco said it is committed to dealing “fairly” with landowners along the 350-mile route from Ohio and West Virginia to Marcus Hook, a suburban Philadelphia town on the Delaware River. The company argues that it has the authority as a “public utility corporation” – a status that is disputed by opponents – to seize people’s land under eminent domain but will only do so as a last resort.

“We recognize the enormous responsibility that comes with eminent domain authority and use that authority only as a last resort when negotiations with landowners have failed,” said Jeff Shields, a spokesman for the company. For example, Shields said Sunoco has initiated action against Ellen Gerhart, a landowner in Huntingdon County, after she rejected the company’s offer of $14,000 for building two 24-inch pipelines on three of her 27 acres.

“The Gerharts were recently notified of our intention to file for condemnation in Huntingdon County under eminent domain authority,” Shields said. Gerhart, 60, a former special education teacher, told StateImpact that she’s concerned about the pipeline’s safety and the risk of the natural gas liquids leaking into a pond on her property.

She said she considered seeking more compensation but decided she doesn’t want the pipeline on her property under any circumstances. “I’m totally against this pipeline going in,” she said. “I’m even more concerned now because we are unable to get any kind of straight answer out of the company on where it will run.”

In nearby Cumberland County, landowner John Perry said Sunoco initially offered him $14,000 for his permission to build two pipelines beneath a 75-foot-wide strip of his land in Upper Frankford Township. He rejected that offer, and a later one of $43,000, saying neither came close to representing the value of the land he would lose through construction of the pipeline, which is expected to begin operation at the end of 2016.

Perry, 81, estimated that his land is worth about $10,000 an acre and that the pipeline would take between 30 and 40 acres. Even if the land had a fair market value of $5,000 an acre, a 40-acre parcel would be worth $200,000, far higher than the $43,000 that the company called its final offer, he said. Perry, who has lived on his 200-acre property for 40 years, said he told the company he would accept compensation of $250,000. He said Sunoco hasn’t said anything yet about taking the land through eminent domain but he fears that it will eventually get its way, if only because of political support for the project.

“There is too much political horsepower behind this pipeline for us to get any sympathy from our political people,” he said. “So we accept the fact that probably eventually we are going to have to live with the pipeline.” He rejected the company’s first offer on the grounds that it would significantly reduce his area of usable land, while cutting the value of what was left. Perry has an existing eight-inch Sunoco pipeline on his property which is now part of the parallel Mariner 1 system, and he spent part of the 1990s negotiating the maintenance terms for the older line. “You’re not only taking 75 feet but you are planning to run a much larger pipeline through my property which will impact the value of the property,” he said.

In mid-June, Sunoco made its final offer, telling Perry that if he didn’t accept it within 10 days, the company would begin “condemnation” proceedings that would lead to an assertion of eminent domain in court.

Perry said he has heard nothing from the company since then, and has hired attorney Michael Faherty, who is representing several property owners in the battle against Sunoco’s Mariner East 2. “I’m waiting for the other shoe to drop,” Perry said.

Bryant Minnich, a building contractor who owns 133 acres in Newville, Cumberland County, said Sunoco initially agreed to pay him $10,400 as compensation for cutting down trees to maintain access to the Mariner East 1 pipeline under an agreement dating back to the 1930s.

Minnich, 50, said he only received the payment after a delay of several months when Sunoco wanted access to his land to survey it for the new Mariner East 2 pipeline. He said he initially denied the company permission to enter because the company had not made the payment.

“I said: ‘You owe me damages that you’ve not even responded to, so you can just stay off my property permanently’”, he said. “Within three weeks, because they need something, I finally get my check for the damages.”

The company then presented its plans for the Mariner East 2 work on Minnich’s property, a project that involved cutting a 50-foot swath plus the creation of a work area and a parking lot.

In return, Sunoco offered $18,000, a sum Minnich rejected, saying he might consider a “six-figure” settlement but would prefer that the company stay away altogether. He also dismissed a subsequent offer for $35,600 on the grounds that it would not compensate for the loss of land, where he and his family have lived for 22 years, or for the aesthetic value of his pond, which would be impaired by the construction work.

Within the last three weeks, Minnich said he has received another letter from Sunoco, saying it plans to clear land for Mariner East 2 by pursuing the terms of the original 1930s agreement — which did not place restrictions on the amount of land the pipeline operator can clear – and providing compensation of just $1,100. The company appears to be ignoring a 2002 amendment to the agreement that sets a limit of 40 feet, Minnich said.

Minnich is also represented by Faherty, who has told Sunoco that it must comply with the terms of the amended agreement, Minnich said. “If they come in and try to take more, then we will end up in a court case against them,” Minnich said.

Faherty, who also represents Gerhart and other Mariner East 2 opponents, said Sunoco has begun eminent domain proceedings against about 10 landowners in the last two weeks. Those property owners live between the West Virginia border and Lebanon County and the company appears to be working its way east along the proposed pipeline route, Faherty said. He predicted that resistant landowners in Chester and Delaware counties will be the company’s next target.

He argued that Sunoco has no right to assert eminent domain because, since the pipeline extends into Ohio and West Virginia, it is an interstate entity and is therefore regulated by the Federal Energy Regulatory Commission, and not by Pennsylvania authorities.

If Mariner 2 was planned to operate only in Pennsylvania, as Mariner 1 does, it would be subject to eminent domain but it is outside the state’s jurisdiction because of its interstate status, he said. The two pipelines jointly make up the Mariner East project.

Faherty said his argument was upheld by a York County judge in 2014 and that he, Faherty, will make it again in a Washington County case that is scheduled for trial in October. “The argument has already been decided so Sunoco should not get a second bite of the apple,” he said.

Opponents of Mariner East 2 include the Clean Air Council, an environmental group whose senior litigation attorney, Alex Bomstein, said the project has sparked more opposition than most pipeline plans. He argued that Sunoco has antagonized public opinion by making different arguments to the PUC, FERC and local zoning boards, depending on its needs at different times.

“It gives different answers to different agencies,” Bomstein said. “People are encountering this type of dishonesty at different levels.” Bomstein estimated that Sunoco has begun eminent domain proceedings against about 20 landowners so far.

Shields of Sunoco reasserted the company’s right to assert eminent domain based on its status as a public utility company regulated by the Pennsylvania Public Utility Commission. “If we file for condemnation, we are proceeding under eminent domain authority, which we consider a last resort,” he said.

Nils Hagen-Frederiksen, a spokesman for the PUC, said the regulator first confirmed Sunoco’s status as a public utility corporation in 2002 and did so again in 2014. Shields would not say how many cases of eminent domain the company is pursuing, how much compensation it has paid, or how many landowners have agreed to Sunoco’s plans.

He declined to confirm the compensation figures reported by Gerhart, Perry and Minnich but said the company’s plan on the Perry property involves a 10-foot extension of an existing 40-foot right of way, while the proposed easement on the Minnich property parallels a right of way for the existing Mariner 1 line.