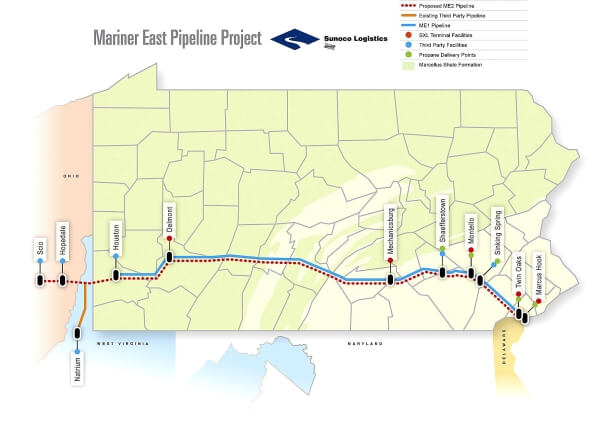 Sunoco Pipeline LP of Pennsylvania filed eminent domain documents in Washington County Court, seeking temporary and permanent rights-of-way on the land of property owners in two townships to move natural gas products to the Philadelphia area as part of a project the company said could have a $4.2 billion economic impact on Pennsylvania.

The company called its Mariner East project “one of the largest investments in the history of the Commonwealth, creating more than 30,100 jobs during the construction period, which would result in workers earning $1.9 billion.”

Eakin said she was served with a copy of the petition Friday evening and she talked to an attorney Monday morning.

She has lived at her address since 1964. Before discussing the eminent domain case with a reporter, she said, “I think I better talk to my lawyer. I’ve never had to have a lawyer before.”

Martha Cowden said Monday, “They want to put a pipeline through my property, and I don’t want them to. I only have an acre, and it would be going right by my back door. I’m thinking about getting a lawyer.”

On the Cowden property, Sunoco is seeking a permanent easement of .11 acres, temporary work space of .15 acres and a temporary access road covering .06 acres.

Sunoco Pipeline asserted since 2002, it has been regulated by the state Public Utility Commission as a public utility, a status it said the PUC reaffirmed both last year and this year.

In 2012, Sunoco announced the Mariner East pipeline project for “wet” gas products such as propane, ethane and butane, designed to relieve the oversupply of natural gas liquids in the Marcellus and Utica Shale basins and to alleviate supply-side shortages of propane and related products in parts of Pennsylvania and the Northeast.

The filing in Washington County Court stresses the difference between an intrastate project – solely within Pennsylvania – and an interstate project that would cross Pennsylvania’s boundaries.

“While the first phase of the Mariner East project initially prioritized the interstate pipeline transportation service of propane and ethane from the Marcellus and Utica basins eastward to the Marcus Hook Industrial Complex … Sunoco Pipeline’s business plan for the Mariner East project as a whole always contemplated intrastate transportation of propane for delivery to customers in Pennsylvania,” the petitions filed in Washington County Court state.

“During and following the 2013-14 winter season, Sunoco Pipeline experienced a significant increase in shipper demand for intrastate shipments of propane due to an increase in local consumer demand for propane,” it continued.

In the filing, Sunoco attributed the changes in market conditions to the harsh winter and “a deficit of pipeline infrastructure. The resulting price spikes and shortages prompted unprecedented emergency measures from both the state and federal governments.”

The regulatory body granted Sunoco Pipeline the authority to suspend and abandon its provision of east-west gasoline and distillate service, with corresponding tariffs, in certain territories along its pipeline to enable the west-to-east Mariner East service of natural gas liquids in that area. The pipeline stretches between Delmont, Westmoreland County, and Twin Oaks, Delaware County, in the Philadelphia metropolitan area.

Sunoco Pipeline’s service territory did not originally include Washington County, but because Mariner East service would originate here, last June Sunoco Pipeline filed an application to expand into Washington County. The PUC granted this revision in August of last year, saying Pennsylvanians and others would benefit from the increased supply of propane as a heating fuel and the “proposed service will offer a safer and more economic transportation alternative for shippers to existing rail and trucking services.”

Sunoco proposed to add the origin point of MarkWest Energy Partners L.P. in Houston Borough to the pipeline, which the PUC approved in March of this year.

Sunoco Pipeline was unable to reach an agreement with Eakins and the Cowdens to acquire the easements, so it has, by corporate resolution, “determined to condemn and (to) appropriate easements” and posted bonds totaling $9,000.

Joe McGinn, senior manager for public affairs for Sunoco Logistics, said last year in an Observer-Reporter story the Mariner East project involved adding about 50 miles of pipeline in parts of Washington and Westmoreland counties that will join Sunoco’s existing pipeline in Delmont. From there, the product will be transported to Sunoco’s Marcus Hook refinery just outside Philadelphia.

McGinn said Sunoco has contracts from companies including Range Resources and Consol Energy to move their “wet gas” production, which includes ethane, from the MarkWest fractionation plant in Chartiers Township to the refinery. He explained if the proposed Shell cracker plant is built in Beaver County, there will be a local market for ethane produced here, but without it, the ethane can be sold elsewhere.

Sunoco is spending a total of $600 million for its east and west pipeline projects. With the exception of some of the valves, the Mariner East 2 pipeline will be routed below ground, with most of it paralleling the right-of-way of the Mariner East 1 pipeline.

Sunoco Pipeline did not identify other landowners along the Mariner East 2 route “to protect (their) anonymity,” it said in the petition to the court.